The Breakup Bible, by Melissa Kantor 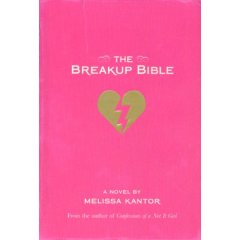 When Max dumbs Jen, she finally understands why those 19th century heroines are always dying from heartbreak. She wishes that she too could die. But when her grandmother gets her a copy of Dr. Emory Emerson's Breakup Bible, Jen still thinks its the silliest thing in the universe. None of this realization saves her from the moping that nearly causes her to miss the opportunity to dig up real dirt on the school district while researching an article on race relations for her school newspaper. No, all she can think about is Max!

A fairly lightweight, but entertaining girl-loses-boy story. The first half drags on as it pulls out the usual romantic angst stuff, but the novel picks up speed in the second half and reaches a satisfactory conclusion.
Posted by Paul at 11:08 PM