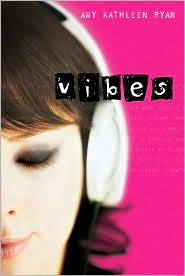 This synopsis will probably make it seem like there is a lot of random stuff going on in this story, but Ryan has a good talent for making it all gel. Yes, some of the subplots could probably have been trimmed out, but I found the story quite readable. The whole psychic subplot, for example, is left beautifully vague and unresolved, which is just the way it needed to be. In so many ways, this book could have gone very badly, but it manages to skate through fine. As another example, a near-sentimental finale avoids the pitfalls and ends up with both a satisfactory sense of closure and enough open stuff to permit a sequel (although I hope that won't happen!). This book is worth reading for both its own enjoyment and as a lesson in how to keep readers nicely on their toes.
Posted by Paul at 5:52 PM 1 comment:

Boy Minus Girl, by Richard Uhlig 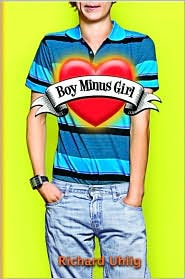 In the early 80s in Kansas, Les is dying to prove himself with a girl. When he isn't jerking off or begging God for forgiveness for doing so, he is studiously studying love-making technique as taught by the book The Seductive Man. He even knows the girl he wants to try it all out on -- if he could only get up the nerve to talk to her. To add to the mix, he's got a bully dogging his tail, a gym teacher on him to practice more, and a pair of overprotective parents. Enter his uncle Ray who makes a rare appearance and stays for a few weeks. Ray is destined to give Les the push he needs to change his life, but it won't really go the way either of them imagined.

The book does itself no favors by claiming to be humorous. There are brief moments here and there but for the most part, this is actually a fairly serious story.
Posted by Paul at 10:37 AM No comments: 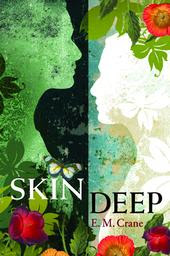 Andrea has spent her life so far observing the people around her, never getting actively involved in anything. But after her homeroom teacher commits suicide and she starts dog-sitting for an eccentric dying woman, her life begins to change. Eventually, she starts questioning her assumptions about high school cliques, her abusive Mom, and what she wants from life.

Well-written and occasionally engaging, this book is so busy being a "modern novel" that it never really tries to tell a story. I found it maddeningly difficult to get through. The usual culprits were at work: half-developed ideas scattered throughout the story (why do contemporary writers of adult fiction think this is a good style? And why do they think it will translate to YA?) and far too much noise. I give her high marks for busting the snobby cheerleader archetype, but beyond such good ideas, this story left me high and dry.
Posted by Paul at 10:21 AM 1 comment:

Cassie Was Here, by Caroline Hickey 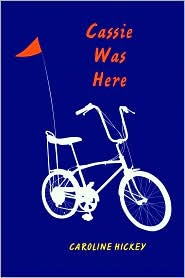 When she was little, Bree had an imaginary friend named Joey. After her family moves to a new town, Bree turns back to Joey for companionship. Here parents are distressed to see their 11 year-old daughter retreating into fantasy, but soon they are even more worried about the real friends Bree is making in the neighborhood. However, initial impressions can be deceiving.

A fairly gentle middle reader about friendships -- both real and imaginary -- and the challenge of transitioning out of the world of make-believe. Hickey has a good sense of life at 11. This is a pleasing book with a lot of respect for its characters (both child and adult), but breaks no significant new ground.
Posted by Paul at 9:49 PM No comments: 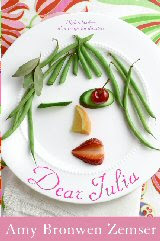 Elaine is a shy and withdrawn girl with an unusual penchant for haute cuisine. She's been cooking since she was little and has perfected and memorized every recipe in Julia Child's books (except the omelet!). She has four brothers (counting the one who keeps borrowing her clothes and wants to be a girl). She has a stay-at-home Dad who's big into yoga. A high-powered Mom who is a member of Congress and can't understand why her eldest daughter wants to make a career out of sweating over a hot stove. But Elaine doesn't have a friend, so she writes letters to Julia Child for help but never manages to mail them off.

Enter Lucida Sans (as in the type face). She's never been good at anything except for trying everything with the aim of becoming famous. She's not quite made it, often because of her weakness for the evil Croton (a rotten fig, a flower gone to seed). But while she doesn't really understand cooking (her two Mom's fry up cream cheese sandwiches!), she sees an opportunity to help Elaine and help both girls achieve their dreams.

A bizarre and strange rollercoaster of fun and mayhem. While the ending goes a bit over the top, you cannot fault the general fun of the story. The characters are hillarious and memorable, and the situations outrageous. This is a delightful book and tops off a run of really good books I've been reading lately (recent arrivals to this BLOG may not believe that I pan far more often than I praise as I'm beginning to sound like a softie)!
Posted by Paul at 10:41 AM No comments:

All We Know of Love, by Nora Raleigh Baskin

Four years ago, Natalie's mother walked out on her and her Dad. Now she has decided to go to Florida in hopes of finding her mother and sorting out why her Mom left. The 24 hour bus trip from Connecticut gives Natalie the opportunity to reflect upon the meaning of "love" and how it has affected her life. But more than an exercise in navel-gazing, Baskin shifts the narrative's POV and inserts anecdotes about love from incidental characters along the way. There are a number of odd plot twists and the story is only slowly revealed, but the overall result is an ode to the various meanings of love.

A thought-provoking novel with a lot to say. Baskin keeps the prose sparing and wraps the whole thing up in 200 pages, which is a blessing as an introspective book like this could have easily gotten tough to plow through. In fact, this is a novel that could easily have gone astray as Baskin trucks out more than the usual quota of YA cliches, but she is masterful at keeping things on track and focused. There has certainly been way too much written on the subject so one might wonder what Baskin could really add to the subject of love, but this story is repackaged in a way that makes it quite intriguing. A good read. If not perfect, it is at least well worth cracking open.
Posted by Paul at 9:24 PM No comments:

The Smile, by Donna Jo Napoli

At the end of the 15th century in Florence, Elisabetta dreams of a beautiful life at her country villa, wedded to the kind but hesitant Giuliano. But these girlish fantasies are not to be as Giuliano is a Medici and events are about to overtake her beloved republic. The years pass, tragedies strike, and her world changes around her, but every opportunity that disappears creates new ones to replace it. And while she keeps her friends and stays true to the things that are important to her, Elisabetta finds her life taking her places she had never imagined. Life is truly much more complicated than she ever imagined. By the time that a decade has passed and the book is closing, culminating in "Mona Lisa" posing for the world's most famous portrait, Napoli has created a parallel literary study to rival the complexity of Lisa's smile.

While the material Napoli has to work with is formidable and fruitful, it in no way diminishes the stunning achievement that this novel truly is. Napoli has written several previous works placed in medieval Italy, but this is easily the best. It underscores her striking command of the historical novel. The historical detail is lovely but never crowds out the narrative or the characters (who are delightful). One could nit pick and note how she grows impatient with her story and rushes it forward towards the end (a problem she also had in Hush) but overall the work is well-developed. Elisabetta is an interesting heroine who stays within the cultural bounds of her time while being vibrant to a modern mind. This is easily one of the best books I have read in the last year. Highly recommended.
Posted by Paul at 9:11 PM No comments:

The Luxe, by Anna Godbersen

In 1899 high society New York, reputation and discretion were paramount. And a family's destiny was driven by the right friends and the right marriage. Add to this exotic and luxurious environ the jealousies and unpredictable hormones of adolescents where everyone (in true classic romance style everyone is in love with the wrong person) and you get the world of The Luxe.

In the midst of medieval England, Matilda is left with Peg the bonesetter to learn the ways of medicine. She hates it. She would much rather be studying the lives of the saint with her beloved tutor Father Leufredus, but he has gone away. To Matilda, Peg and her colleagues (a doctor, a leech, and a barber) are barbarous folk -- not so much for their profession, but for being illiterate and uneducated. In her mind, only the learned Master Theobald is a worthy practititioner, although even Matilda acknowledges that he seems less successful at curing his patients. Matilda struggles with this contradiction and others.

Less funny than Catherine, and a bit more bookish (Cushman admits in the afterword that she fought the temptation to make this a textbook instead of a novel), Matilda Bone is an interesting read but a disappointment. You can't quite escape the feeling we're being taught here rather than entertained. And while the characters are interesting enough, one loses sympathy for Matilda's attitude and arrogance amidst such kindness and generosity.
Posted by Paul at 12:41 PM No comments: