Everything Is Fine, by Ann Dee Ellis 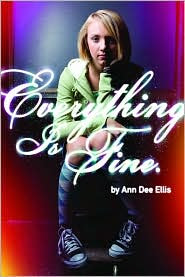 Mazzy's mother is sick, lying at home slowly vegetating from grief. Mazzy's Dad is away from home pursuing his dream job of being a sports commentator on ESPN and avoiding facing th truth about what is going on at home. People come by to help (a home health aide named Bill, the neighbors, a hired woman who brings the groceries, a concerned social worker, etc.) but each time Mazzy tries to drive them off with her "karate chops" and an assurance that "everything is fine," even if it most certainly is not.

The story seeks poignancy by telling the story entirely through Mazzy's voice and her drawings. That would work if Mazzy wasn't such an unlikeable character. Some of this nastiness is a result of her need to protect her family, but there is also a terrible selfish streak to her that really turned me off. And as the story promised that everything would be revealed, I wanted to find out that Mazzy had some good reason for behaving as she did (autism, ADHD, anything!) but that never came. Once I hated the main character, my interest in what happened to her plummeted. And my desire to read her (realistically) scrappy narrative declined. An interesting concept but a book that you will probably want to give a pass on.
Posted by Paul at 7:41 PM