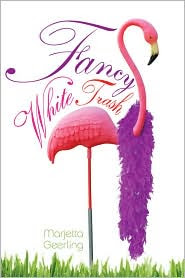 Abby has developed a series of rules (You Don't Need Him, No Baggage from the Past, etc.) to help save her from the fate of her sisters and mother. Mom's been married three times already (twice to Abby's biological Dad) and she's now pregnant with the child of The Guitar Player (who's also managed to get Abby's older sister pregnant). Add to all this that Abby's about the only one in the family so far that hasn't been a teenage mother, and you can appreciate why she's trying to live by some sort of order. But her life is really just a Jerry Springer episode in the making -- her best friend is an in-the-closet gay boy with immaculate taste, and she can't tell if she's ready to date the older brother of that same best friend (she's hesitant because she's convinced that he might be the father of one of her sister's kid). Oh yeah, she likes to watch soap operas...can you tell?

If you take this story as light entertainment, it works pretty well as a farce. It's a little too serious to be comedy though and way over-the-top for serious drama. So, I just sort of waded through it, never quite managing to get connected with the characters. It's cute and it's original at times (skipping over a very tired cliched portrayal of the gay friend), but it's not very compelling.
Posted by Paul at 5:56 PM