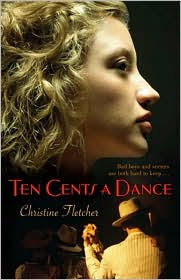 In 1941 in Chicago, Ruby must find a way to support her widowed mother and younger sister. Working in the stockyards, she can barely earn anough money to scrape by and certainly not enough to get her family out of their living situation. But when a local boy tells her about a dance hall where she can get paid for dancing with men, she decides to explore the option. She loves dancing, after all, and the promise of earning $50 a week sure sounds great! Very quickly, Ruby realizes that there is much more to the job than simply dancing and comes to understand that she is going to have to make some difficult decisions in order to survive.

Appearing on several "best of 2008" lists this year, I was intrigued by this book. It doesn't fall into the category of a book I would normally want to read. I'm not big of historical novels and 20th century really tends to bore me. However, the richness of the detail and the engrossing story very quickly take over. Gangsters and jazz in Chicago is pretty tired cliche but this book never falls a foul of that. Instead, we get a glimpse of a really vibrant world and a story about a truly original heroine. Truly, a very well crafted story!
Posted by Paul at 10:42 PM