Climbing the Stairs, by Padma Venkatraman 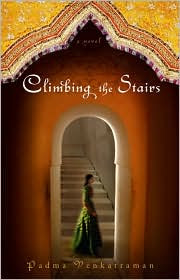 In India in 1941, there are two wars taking place -- WW II is going on in the periphery but closer to home, India is struggling for its independence. When Vidya's father is rendered an invalid from a savage beating, the family is forced to take refuge in the unsympathetic arms of her father's family. In their new home, Vidya must struggle simply for the right to read (the family does not approve of such pursuits by a woman). So, it seems like a lost cause to continue to hope to be given the chance to go to college when she graduates from school (far more likely, she will be forced into marriage). But hope comes from surprising places in this exotic and inspirational tale.

A lot of momentum is lost to exposition and explanation of the culture, but that is to be expected given the unfamiliar locale and customs, and Venkatraman makes up for it with a well-paced story. The characters are interesting and Vidya's ability to overcome her adverse conditions with a combination of luck and perseverance is appealing and rewarding. An interesting story that will appeal especially to people not familiar with the era or the place.
Posted by Paul at 10:51 PM