Everything Beautiful, by Simmone Howell 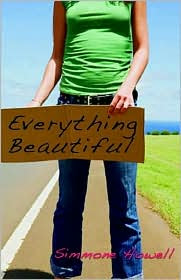 When Riley screws up again, her Dad and Stepmom decide that the best thing to do with her during their planned vacation is to send her to a Christian camp in the outback for a week. This naturally enough does not go down well with atheist and wild grrl Riley. And in her first day or two there, she does her best to not fit in. However, she grows close to wheelchair-bound Dylan and (against her own better judgement) begins to enjoy herself, even as she manages to get in more and more trouble.

Despite some originality in the characters (Howell does a good job of giving everyone a twist that keeps them a step or two away from the stereotypes), the story itself is pretty much by-the-numbers and the conclusion falters badly. The novel gets points for avoiding feel-good observations about paraplegics and any temptation to throw in a cheap redemption scene. But the cost is that the story never quite wraps up and an attempt at spiritual depth towards the end falls flat. But I found the characters interesting and original enough to keep me involved in the story.
Posted by Paul at 4:58 PM