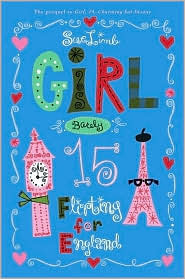 This prequel to Girl, 15, Charming But Insane, picks up Jess's life a few months earlier (as the title suggests) when a group of French students come to visit on exchange. Jess's surprise at having to host a boy is quickly supplanted by her fantasies of ending up with a Gallic Stud. When Edouard ends up being a mealy geek instead, Jess turns her eyes to one of the other boys. Things get complicated during a weekend camping trip when Jess and her girl friends find themselves in competition for the same young man.

As I noted in my review of Girl, Going on 17: Pants on Fire (the third book in the series), the franchise seemed a bit exhausted, and as I started this one I was pretty much afraid that that was how it was going to go. But after some purely dreadful passages with the girls basically just doing silly gossipy things, they hit the countryside and the story starts getting interesting! Far too soon, however, we're back at school and it goes dreadful dull again. Younger readers may enjoy this book, but most American teens will find them either hopelessly tame or frivolous. For the most part, the joy and fun that was in the original is largely gone (or retread).

I was also rather annoyed at the two attempts to tie in Limb's new characters (Zoe and Chloe -- see forthcoming review of the first book in that series!). Largely pointless, these two passages have nothing to do with Jess's story and seem solely intended to create name recognition and product placement. Shame!
Posted by Paul at 9:29 AM