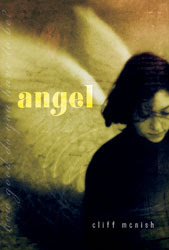 When Freya was little, she was visited by an angel. The experience led her to become obsessed with angels until that obsession drove her into madness. Now that she is 14, she's better and returned to a normal life, just trying to fit in at school. But the arrival of a strange girl named Stephanie, her brother's struggles with a bully, her father's battle against illness, and the appearance of a dark apparition all threaten the sanity she has struggled so hard to achieve.

A complex and interesting story that spends about as much time exploring high school cliques as it does the meaning of good and evil (in a way that will appeal to teen readers well!). If you're not into angels (and I'm not), there is still a decent adventure story here. But if angels are your thing, you'll like this even more.
Posted by Paul at 12:03 AM