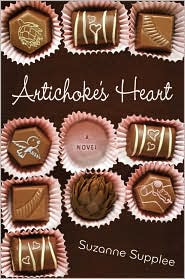 Continuing on the same theme...it was the plane ride devoted to eating disorders!

Rosie (nicknamed "Artichoke" so many years ago) struggles with food. Unable to moderate her consumption, she binges as a means of soothing her heartaches. But when she cracks through 200 lbs, she commits herself to losing weight. Meanwhile, she also struggles with a variety of outside stressors: a mother sick with cancer, a new friend who has been cast out of the popular girl clique, and a gorgeous boy-crush who (for some reason she cannot fathom) actually likes her in return. All of this is set in the environs of a Spring Hill TN beauty salon (cue lots of Southern cliche).

Overall, this is a nice story about finding self-esteem and gaining the strength to take charge of one's life. The added element about coming to terms with a sick parent will probably make this a popular pick for mother-daughter book clubs. However, I couldn't quite get beyond the chaotic number of subplots. The overall impact was that I began to block out large amounts of the story just to stay focused on the main narrative. The rest just got distracting. Subplots are beautiful things but focus is best!
Posted by Paul at 2:58 PM