Down to the Bone, by Mayra Lazara Dole 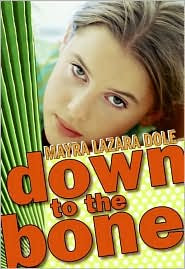 Laury is a typical Cuban-American girl living in Miami with a secret (she is in love with another girl) and when a nun intercepts a love letter between the two girls, Laury is kicked out of school and out of her home by a mother who won't let her back until she changes into a heterosexual. So Laury has to go out and fend on her own, which she actually does quite well at: finding a job, making friends, and discovering her identity. She still struggles with whether she should date boys in order to win back her mother or be true to her heart and see girls. In between, Dole gives us a lot of local color and custom, and insight into the gay Cuban-American scene.

Fast paced and heavily laced with jargon and cultural details, Dole obviously knows the milieu and appreciates the culture, mores, cuisine, and patois of Miami. Readers who want the multicultural experience will appreciate the chance to read about a sympathetic character who is Cuban-American and unashamedly gay at the same time. Moving beyond that, however, this is a very thin book. Dole is great with dialogue and so relies on endless conversations about nothing (basically, just her characters "chilling" or "kicking"). Important plot developments get stated quickly and we return to the chatter. The result is frustrating. The characters obviously had a lot going on inside, but we don't get to learn much about that as neither they (nor the author) want to share.
Posted by Paul at 1:38 PM