Every Soul A Star, by Wendy Mass 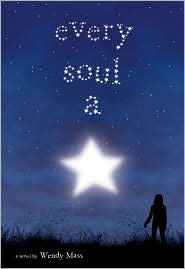 Three kids from three different backgrounds: Ally (shy and isolated, she's spent most of her life with her parents and little brother taking care of a campground deep in the woods and now most face the decision of her parents to leave and return to civilization), Bree (spoiled and materialistic, her dreams of becoming a fashion model are destroyed by her parents' decision to pull up stakes and relocate the family to the campground to replace Ally's family), and Jack (a dreamy artist who's never had much interest in science but has been offered the opportunity to skip summer school if he'll accompany his science teacher to the aforementioned campground to help observe a total solar eclipse). Three kids faced with impending huge changes in their lives and the rare opportunity to observe one of the most beautiful occurrences in nature.

A fun and mostly fulfilling read about learning to accept changes and discovering oneself, Mass has delivered another winning novel for middle readers. I was a bit disappointed at how easily the characters changed and I would have appreciated a bit more drama and resistance. That said, Mass brings great creativity to this work (and which novel of hers hasn't been creative and interesting?) and a strong ability with characters. Even Bree, who could easily have been the least likable of the three narrators, develops in a way that makes her sympathetic and identifiable. And while following a convention where each narrator gets to tell the story in alternating chapters can easily get tiring, Mass keeps the pace up. A good read.
Posted by Paul at 10:32 AM