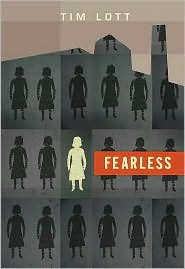 In the future, the Ten Corporations run the world and the City is controlled by the City Boss. Children who do not comply with the rules (or who have the misfortune of being associated with parents who do not) are sent to the City Community Faith School -- really, a prison -- where they are stripped of their names and identities and forced to work. One day, one of the girls raises up her voice and challenges the status quo. Nicknamed "Little Fearless," she hatches a plan to free the girls and wake up the compliant cityzens of the City.

A clever and rich allegory, although largely derivative of most other dystopian novels, Lott spins an intersting story. Character development is sparse but in a world of such dehumanization, it is hard to flesh out characters. Instead, we get a fast-paced adventure story. The ending is all a bit too convenient for me, but suffered mostly from being so rushed (it was certainly plausible). The story overall will give you plenty to think about and makes a nice discussion piece (for people who like to analyze literature!).
Posted by Paul at 11:02 PM