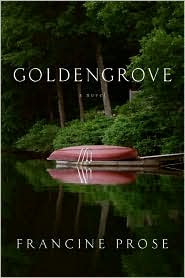 After her sister drowns, Nico and her family must come to grips with their loss and grief. Nico's father buries himself in a book he is writing ("Eschatology for Dummies"), her Mom starts abusing painkillers, and Nico herself gets drawn into a relationship with her dead sister's boyfriend. The relationship, which begins as simply a means to vent their grief, spirals out of control as Nico finds herself unable to accept that her sister is truly gone.

I seem to have picked up a lot of books about death and grieving lately. This one, not truly a YA book, is well-enough written but suffers from the same general problems as the others: what can you actually say about this subject? Someone died, you spend a lot of time ruminating about them, and then you either move or or you don't. Prose (great name for a writer, don't you think?) has little to add to this formula and even less about going through it as a teen. Her 13 year-old narrator tells the story through the benefit of adult flashback, so comes across as terribly precocious.
Posted by Paul at 12:18 AM