Gossip of the Starlings, by Nina de Gramont 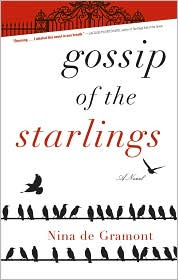 In 1984, Catherine is being given a chance to redeem herself after being removed from her last school for sleeping with her boyfriend. She misses her old friend Susannah, but is quickly befriended at her new school by Skye Butterfield (the daughter of one of the state's senators). Skye is hardly a good influence and quickly leads Catherine into bad old habits that threaten to destroy all of them. In sum, a complicated story about adolescent jealousies told in a past passive voice that implies recollection from a wiser older self.

Overall, this is a terribly dull and boring story. The narrator's passive voice does nothing to help. Billed as YA, the novel is really a wistful adult novel about teens (it's no coincidence that Jacquelyn Mitchard's gushing praise appears on the cover -- only she could write a novel that was similarly dull and age-inappropriate as this!). The characters spend their time waxing poetic with a wisdom entirely inappropriate for their age (and lack to ego-centricity that authentic 17 year-olds would express). And where did all the cocaine come from? I myself went to a private school in New England in 1985 and, while we had plenty of pot and acid, none of us could afford the plethora of blow that these young women plow through! Just give this story a miss! There are plenty of nostalgic stories about teens written by grownups -- most of them are more interesting than this one.
Posted by Paul at 10:13 AM