What They Always Tell Us, by Martin Wilson 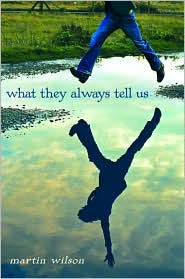 At a party at the beginning of his Junior Year, Alex decided on a whim to swallow a bottle of Pine-Sol. A month later, he is coming to terms with what prompted such a rash act and dealing with the way that his old friends are treating him now. His older brother James has issues of his own, not least of which is a suspicion about the unusual attention that his friend Nathen is paying to Alex. A lonely 10 year-old boy next door plays a role in both Alex's and James's lives as well.

A strange story that can't seem to decide what it wants to be about. Alex's coming-out story is the clearest plot line and would seem to be the focus of the novel, but half of the book is really about James and James's storyline never really seems to go anywhere. The subplot about the boy next door also seems to lead nowhere. None of this is helped by the lack of real character development. As much as we would expect the suicidal and sexual-orientation-questioning Alex to make an interesting character, he stays pretty flat. For me, neither Alex nor James really came alive off the page.
Posted by Paul at 10:26 AM