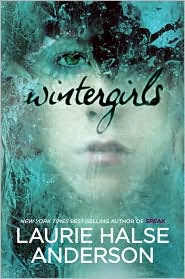 When Lia's best friend Cassie dies, Lia knows it is her fault. Never mind that Cassie has been purging for years and destroying herself through bulimia and alcohol. Lia knows that Cassie tried to call her a couple of dozen times before she died and Lia never called her back because she was afraid to help her old friend. Not that Lia can tell anyone about this, because if she did, they would throw her back in the nuthouse again. Just as they would if they knew that she was losing weight again. Instead, she has to lie her way, denying to everyone - including herself - that she has a problem (beyond being massively overweight and trying to get herself down to 75lbs or less!).

A truly harrowing trip through the mind of an anorexic. Anderson, of course, is of the great shining stars of YA lit and this book certainly does not disappoint. This is a hard topic to read about and (for me) harder to relate to than her other books (I'll be honest and say that I just don't anorexia -- it combines self-denial with a lethal dose of dishonesty and self-indulgence that repels me on several levels -- but perhaps it is a Good Thing that I can't quite comprehend the motives). Wintergirls lacks the humor and emotional release that helped lighten Speak but I think it is fair to say that humor would have been out of place in a story like this. What Wintergirls offers instead is an unrelenting tour of self-destructive madness. This is scary stuff but worth reading!
Posted by Paul at 2:48 PM