Zoe & Chloe on the Prowl, by Sue Limb 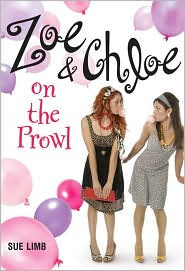 Zoe and Chloe are desperately looking for boys to take them to the Earthquake Ball next weekend and they get the bright idea of interviewing candidates for the role by inventing a fake job vacancy to use as a cover. Around the same time, Zoe's older sister has a crisis and needs the girls' help. There's also the amazingly naughty Norman boys to babysit, a suspicious mother to placate, Zoe's attempts to charm Oliver, and all manner of zany adventures to keep this story moving.

It's really hard to say what drove me to finish this book. I picked it up in hope that Limb would find new energy with some new characters (since her Jess Jordan series has been losing steam and energy), but these two girls are no mindlessly lame that it was some sort of torture to finish the book. I realize that this isn't a book intended for blokes (to coin the Brit flavor of the writing), but I can't see much here for girls either. Most of the book is spend gushing and fretting and not much of substance goes on (just because it's a children's book doesn't mean it needs to be completely vapid, does it?). By the time we get to flatulence jokes on page 78, I would think that most folks would be ready to turn this one in. Unfortunately, Limb appears to be a one-hit wonder with Girl, 15 Charming But Insane (a brilliant story she just has never managed to match for creativity and fun).
Posted by Paul at 8:19 PM