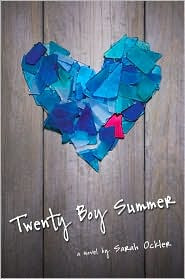 Anna was always inseparable from her next-door neighbors Matt and Frankie (they were brother and sister she never had), but at her birthday thirteen months ago Matt became something much more. For the next month, Matt and Anna would sneak out of their houses for late-night rendezvous, always hiding their growing feelings from their parents and (especially) from Matt's sister Frankie. Even though Anna and Frankie were best of friends, Matt convinced Anna that it would be best if they waited until Summer vacation to tell Frankie. But then, a car accident leaves Matt dead, Frankie injured and grieving, and Anna unable to ever tell the truth. Bound by her promise to Matt to not tell Frankie, Anna now finds herself supporting her friend grieve.

Now, one year after the accident, Frankie and her family have invited Anna to join them for a summer on the beach (the same vacation that they planned for a year ago and never took). It promises to be a memorable trip -- full of secrets revealed, grief laid bare, and the pursuit of "20 boys."

From that description, this book looks like light schlock, and on its surface this book is a bit formulaic and predictable. It also has a habit of pulling on your heart strings in a way that left me a bit suspicious. But there is a lot going on in this story and it resists easy solutions. Ockler is respectful of her characters and plays them well, allowing no one to escape blame yet never finding fault completely in any court. Each one is flawed in their own way. The result is a story that feels surprisingly real and has something meaningful to say about friendship and grief (in a way that all ages can appreciate). The plot may sound a bit melodramatic, but the characters never are. For a first novel, it is an extraordinary accomplishment. This is a book that is well worth seeking out.
Posted by Paul at 8:11 AM