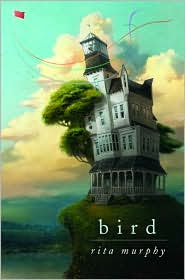 Miranda is a small girl. So small that she is easily picked up by the wind and blown around. How she came to be at Bourne Manor, under the guardianship of the widow Wysteria Barrows, is a mystery to her as she can't quite remember how she got here. But the mysteries just keep getting bigger: there's the fact that Wysteria locks all the rooms at night, or the protective dogs who prowl the house, and the secret rooms on the third floor filled with books and beautiful kites that Miranda discovers. It is only when Miranda befriends a young sailor and Wysteria is sent to a hospital for a month that Miranda begins to unwind the mysteries.

A fascinating blend of fantasy, ghost story, and self-discovery novel, Bird operates as something of an extended metaphor. Miranda's search for herself and her "wings" to fly away from her nest plays out very nicely and the story twists and turns enough to keep thuings interesting. The ending gets a bit rushed and might have benefitted from some fleshing out, but this does not distract from the charm and originality of the novel.
Posted by Paul at 2:48 PM