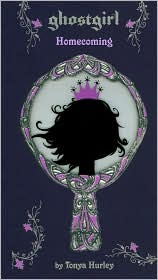 In this sequel to Ghostgirl, Charlotte and her friends from Dead Ed have passed over, but to what? The Afterlife, it seems, is a huge call center where people in this world call in seeking help from the next. The problem, though, is that Charlotte isn't getting any calls and her so-called friends seem to be abandoning her as well (except for a new girl named Maddie). Charlotte doesn't entirely trust Maddie at first but she's all that Charlotte has, until her old friends from the living world Damen and Scarlet call out to her for help again. This time, it's Scarlet's vain sister Petula who's in desperate trouble -- on the verge of death with little chance of making it to Homecoming queendom -- truly a fate worse than death!

The original was clever and funny, which gave the sequel a lot to live up to, although Hurley more or less manages. The death jokes have worn a bit thin by now and Hurley wisely avoids them, in favor of telling a more complicated story about both Homecoming and coming home. This provides the story with a bit more depth than the original novel (which is a Good Thing). The plot itself was a bit hard to follow and I would recommend re-reading the first book again before tackling this one, but this installment is a pleasing continuation of a truly original and exciting franchise.
Posted by Paul at 9:33 PM