The Ghosts of Kerfol, by Deborah Noyes 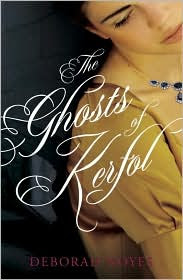 In the early 17th century, a cruel baron is murdered. His young wife is accused, although she claims he was mauled to death by dogs -- or rather, the ghosts of dogs that he himself strangled. Flash forward two hundred years and an aspiring artist visiting the estate sees apparitions of dogs and a young lady. Go forward another hundred years, and a young woman is mysteriously strangled by another apparition. Sixty years later, a couple on a lark are tortured by visions that seem to be after them. Finally, another twenty years in the future, a deaf gardener has a strange evening where he hears a series of ghosts.

Apparently based on an Edith Wharton story, Noyes has basically retold the original and then developed a riff on it with the flash forwards. I'm not familiar with the Wharton story, so I can only judge this book on its own merits. For me, the first part of the story (i.e., the part based on Wharton) is the most interesting. The rest seems rough and unfinished, and -- in the end -- not very engaging. This literary experiment didn't work for me.
Posted by Paul at 7:51 PM