The Noah Confessions, by Barbara Hall 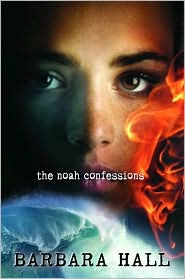 When Lynne turns 16,she is shocked to find out that her father has not gotten her a car (everyone at her high school gets a car when they turn 16!). But the bigger shock comes when her Dad hands her a letter that her Mom (dead now for the past 8 years or so) wrote when she was 16 herself. In this letter, her Mom confesses to being an accomplice in a terrible crime committed in the past -- a crime which led directly to meeting her father and having her. Lynne tries to cope with this shocking news and deal with the news that her mother may not have been as perfect as she imagined. And meanwhile struggle to learn how to surf and date her first boyfriend.

There's a complexity to this story that is good, in that it keeps things interesting. However, it also overwhelms the reader. There are too many timelines at play here and few of them really matter (despite the claims of the narrator that we need to understand everything). Secondly, I grew tired of being told by the narrator what was important (I prefer to figure that stuff out for myself). Too much build-up guarantees that the story never quite pays off fully. The secret is supposed to be so shocking and Lynne (over)reacts so strongly to the news, while we're left spinning trying to figure out what the big deal is. I'll admit that the story did not drag, but I did find myself wanting to skim over the exposition to get to the real story.
Posted by Paul at 3:55 PM