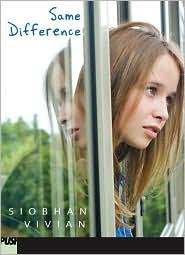 When Emily gets the opportunity to attend a Summer program at the Philadelphia College of Fine Art, she goes from excitement to terror as the reality of attending classes in the city (only 30 miles -- but an entire culture -- away from her life in suburban Jersey) and being in classes with students who are seemingly much more talented than she is. She is quickly captivated by a rogue outsider named Fiona who has a flare for unorthodox guerrilla art, and Emily finds herself emulating her new heroine. But as she tried to be more and more like Fiona, she also is drawn away from who she was (and especially from her hometown friend Meg). In the end, Emily feels that she has to choose between the two worlds.

A comfortably predictable storyline, but combined with characters who are interesting enough to care about and follow. This is a stronger book than Vivian's previous A Little Friendly Advice, so if you liked that one, you're bound to like this one. I enjoyed the artsy environment and detailed tour of the Philly arts scene. Vivian is at her strongest though when she just lets her characters interact, so I generally preferred the parts of the book where we weren't traveling about or doing things. Overall, there's not a lot of surprise here, but it's a competent and enjoyable read.

The one thing that really bothered me about this book was the cover. For a reason I find hard to explain, I can't picture the girl on the cover as being Emily (or Fiona). She just doesn't look the part (at best, maybe like Claire - Emily's younger sister). I admit that it's a totally irrational conclusion though!
Posted by Paul at 9:00 PM