Ten Things I Hate About Me, by Randa Abdel-Fattah 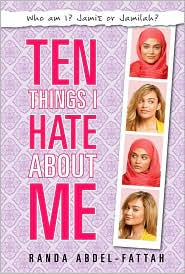 Jamie is a normal 10th grader in a suburb of Sidney. But she's actually Jamilah, an Arab-Australian. Jamie dies her hair blonde and wears blue contact lenses to hide her true ethnic identity and avoid the brutal racist teasing of her peers. But she has a hard time denying that she's happiest when she's at home and can just be herself, even if she has an overprotective father and a dorky older brother.

The age of the protagonist suggests that this book is being targetted at the YA demographic but the rather pedantic portrayal of racism seems to indicate a middle-reader audience. Or perhaps racism is much more obvious in Australia? Or perhaps Abdel-Fattah simply does not expect her readers to be able to handle subtle? In any case, the whole thing seems a bit artificially constructed and manipulative. It's nice to have a story that explores Arab identity, but it could have been a lot more sophisticated.
Posted by Paul at 3:35 PM