What Would Emma Do? by Eileen Cook 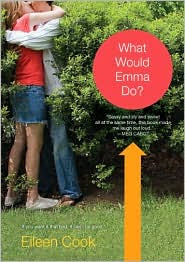 The town of Wheaton IN is a pretty small place, and a tight community where everyone knows each other. So, when Emma makes the mistake of kissing her best friend Joann's boyfriend (and gets caught in the act by Joann's Mom), life is pretty much at an end. At first, Emma could officially not care less. She's dying to get out of town and, thanks to her running times, she may just get a scholarship at Northwestern that will take her away. But everything gets thrown into chaos when the pastor's daughter and her friend fall ill and accusations of "terrorism" and "Satanism" start to spread around the school. As people start to get falsely accused, Emma (who unwittingly knows the truth) must decide whether to stand up and bear witness or take the easier path and escape.

Surprisingly engaging and exciting, by the point I was half way through, I found it hard to put this book down. Cook takes a lot of cheap shots at organized religion and small towns, but this serves the purpose of ratcheting up the drama and making the story interesting. While the blurb compares the Cook to Judy Blume, I think the fairer comparison is Joan Bauer and this book reminds me strongly of one of my faves (Hope Was Here) in the way it rights the wrongs in a very empowering way. Emma is a funny and insightful character -- a bit too wise for her years and environs to be believable, but still quite enjoyable. Also, while the stars align a bit too neatly at the end, you really want a story like this to have a feel good ending and the payoff is welcome. A fun read for the beginning of summer!
Posted by Paul at 9:40 PM