The Year the Swallows Came Early, by Kathryn Fitzmaurice 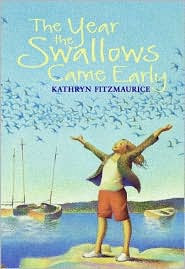 Eleanor (or "Groovy," as her Dad calls her) lives in San Juan Capistrano (a part of California where large flocks of swallows nest each year) and loves to cook. All of which would make for an unremarkable story except for the fact that her father gets arrested on page two. At first, Eleanor is convinced that it is all a mistake, but when she finds out that it isn't, she struggles with accepting the situation and forgiving her father for his errors. Her friend Frankie struggles similarly with forgiving his own mother for abandoning him.

A gentle middle reader. The pacing is glacial, making the story a bit dull (it takes 100 pages just to find out why the father got arrested!), but the overall message of forgiveness and the corrosive effect of carrying anger is a winner. What the book does need is more of a hook -- if not more story, then at least more character and more humor.
Posted by Paul at 7:59 PM