Along for the Ride, by Sarah Dessen 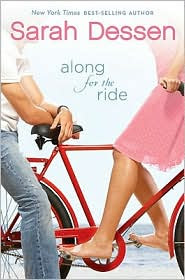 On the spur of the moment, Auden decides to flee her demanding overachieving mother and spend her last Summer before college at the beach, with her father, stepmother, and their new baby. However, all is not peace and tranquility there either as her Dad (a paragon of passive-aggressive self-centeredness) is fleeing fatherhood and avoiding Auden as well. Auden copes with all of this as she usually does -- through avoidance (sense a theme to the dysfunction in this family?) and nocturnal exploration of the town. Along the way, she meets Eli, a loner with a past and a bike shop. Through their budding friendship, Auden learns to confront her bad habits, accept the faults of her parents, and conquer her fear of failure. She also learns how to ride a bike.

The arrival of a new Sarah Dessen novel is a Major Event and it took some will power to not devour this book the moment it came out (or, for that matter, to not offer abnormal sacrifices to the publicists at Viking to get an ARC). Dessen is, without a doubt, one of the very best YA writers alive and most of her books get my highest ratings. This one, unfortunately, is not one of them.

Sarah's had a baby recently. You'd know that if you read her BLOG, but you'd also know that simply by reading this book. The character of Thisbe (Auden's infant half-sister) plays a major role in the book. The reason is obvious: Dessen's own life is centered now around her own child so it is natural enough to want to share all of that with her readers. Fine and fair, but it makes for an odd focus in a YA story. And the frequency of the child-raising observations (how many times does Dessen remind us what Thisbe smells like? How many child raising tips somehow find their way into the novel?) suggests a high degree of distraction. Dessen would obviously prefer to be writing a story about the joys of motherhood. Also fine. But that is not the world of an 18-year girl and Auden (the book's alleged center) is frequently lost in the shuffle.

But moving on....the book is plagued with problems. Auden's relationship with Eli is strangely without spark, supporting characters lack either the draw or the humor of her previous novels, and the plot meanders around. The story itself is recycled, basically Auden and Eli are Annabel and Owen from Just Listen (but with a far less interesting dynamic). The ol' closed-suppressed- girl-learns-to-open-up-through-the-mysterious (but patient and kind)-boy plot is a winner and makes for lots of aw-shucks reading, but it is not original. Dessen can do a lot better.

All that said, Dessen on a bad day is pretty spectacular compared to the other writers out there. I may think Dreamland and Someone Like You are much better books, but none of that should detract from the fact that Dessen writes well, has a great ear for teens (Mid-Atlantic and Southern ones at least!), and creates some of the most beautiful literature out there.

Finally, for anyone who read the book: was anyone else bothered by the cover? Auden makes a big point of explaining how she is not a pink-wearing girly-girl, yet the young woman on the cover is decked out in a dress that Auden would not be caught dead in. What's with that?!
Posted by Paul at 8:24 PM

I also had a huge problem with the cover! Auden would never wear pink and I'm pretty sure Eli wouldn't wear the pictured outfit either. (plus, can't we have a cover that doesn't have a girls torso on it for once).

Yeah, the torso thing bothers me as well, but I think the idea is that they don't want to show the face (because readers have their own ideas of what the characters actually look like). Still, it gets a bit creepy.

Maybe the fact that she is wearing a pink dress, also alluded to by the fact that they are on a bicycle, is a reference to how she had changed in her few months in Colby. Just a thought.

I thought that the cover symbolized Auden's change throughout the book. It showed that she didn't look at things through feminist eyes as much as she did in the beginning of the book. This showed that Auden's perspective changed, and her personality went from extremely boring, to, just slightly, effervescent.

I agree Anna! I thought that Auden wearing a pink dress on the cover symbolized her change. It showed that she doesn't view that world through feminist eyes, as she did in the beginning of the book. It showed that her personality grew from really boring, and bottled up, to a little more outgoing, and effervescent. It showed that she blossomed as a person.