Anything But Typical, by Nora Raleigh Baskin 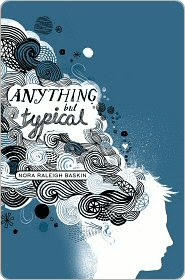 This unusual book attempts to put us inside the mind of a 12 year-old autistic boy named Jason Blake. The story is predictably sad as Jason recounts his struggles to be understood in the "neurotypical" world of mainstream society. Amidst the teasing of his peers and their rejection of his differences, Jason's joy is writing and he shows great talent in written language skills. And while is does well enough in school, he shines brightest on an online writer's group, where he meets a girl named Rebecca with whom he shares his stories. It's a wonderful relationship for Jason and helps him build confidence, until Jason's parents innocently reward him by offering to take him to a writers' convention (where, as it happens, Rebecca will also be). Now, Jason is terrified of how Rebecca will react when she sees what he is really like in the flesh.

For its target audience (10-14 year olds), it is a bit hard to see how this book will appeal. Autism is a tricky condition to understand for adults and young readers (unless they are familiar with autism) will find this a challenging story to follow. Still, this is something to be commended in stories like this that at least attempt to make such a character accessible. Baskin certainly does this, never glorifying Jason's struggles or flaws. Rather, we get a nicely nuanced story which allows the reader to both sympathize with Jason and with the people he deals with. There are no good guys or bad guys here, but simply people being themselves for better or worse. And the story wraps without recourse to either any feel good or tragic endings.
Posted by Paul at 3:18 PM

This book is amazing! i read it for an assignment and i reccommend it to anyone who loves a good book.

i loved this book! if you love reading, or even if you rarely read, this book is still for you. its an amazing read for anyone