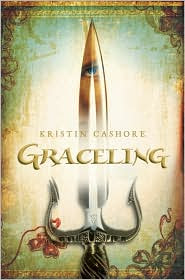 Katsa is a graceling -- a person endowed with a particular skill that makes them stand out from others. Katsa's skill gives her the ability to defeat just about anyone she comes in conflict with. It's a skill that has made her very useful to King Randa, her uncle. But she has tired of being sent out to do randa's dirty work and longs for a higher calling. When she gets involved in saving the grandfather of a prince in another kingdom, she and the prince (named Po) forge a strong friendship based on their mutually compatible graces (Po is also an expert at combat) and their strong feelings for each other. However, the struggle they now undertake will stretch their talents and their loyalty to the outer limits.

Placed in a mythical land of seven kingdoms, this fantasy novel is surprisingly down-to-earth. On its face, it is a well-paced and exciting action tale with a satisfying conclusion. But Cashore has much higher ambitions for the work. Katsa and Po's struggle with both their graces and with their feelings for each other, are wonderfully familiar to anyone who has/is struggling with adolescence and much of the story works as a parable. The strong female characters are also a joy and show that Cashore (while she is happy to celebrate womanhood) feels no qualms about making her women and girls tough as nails when they need to be. The overall result is a surprisingly fast read and great summer escapism, but with substance and relevance not often found in fantasy books. Hooray!
Posted by Paul at 5:48 PM