If I Stay, by Gayle Forman 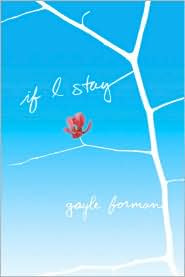 When Mia is tossed into a ditch from her parent's car during an accident, she initially thinks that she has miraculously survived without a scratch, but as she wanders around, she realizes that somehow she has left her comatose body and is now a passive observer of events. And the events are horrendous: both of her parents have died, her little brother is in unknown condition, and her her own body is badly mangled. So, while her physical body lies in a Portland ICU, Mia finds herself replaying her life and trying to decide if it is worth staying alive.

This is familiar enough territory and the author is good enough the acknowledge the usual suspects like Ghost, but also a bit different. For one thing, Mia is less concerned with the present than she is with the past. That makes for awkward storytelling as we are naturally far more interested in whether she will live or die than her out-of-order flashbacks over her life. And it does not help that the flashbacks themselves sometimes fail to contribute to the story in an obvious fashion. I found it hard to connect with Mia and parts of the story dragged for me. So, in the end, it never quite worked: being not as poignant as Forman intended nor enlightening or inspiring.
Posted by Paul at 3:09 PM