Love (and other uses for duct tape), by Carrie Jones 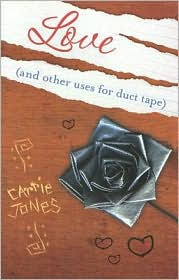 Belle and Em are in their last months of High School. Living in small town Maine, there might not seem to be a lot to do, but there is certainly a lot going on in Belle's mind. For example, there's the unfinished business of a dead father, a mother who mangles the words to songs on purpose, a boyfriend who is afraid to push Belle into having sex (even though she wants to be pushed), and - to top it all - Em has found out she is pregnant. Lacking any traditional sense of narrative, Jones's novel explores friendship, identity, love, and (yes) duct tape.

There is an amazing depth to the characters in this book. Jones is obviously an expert in this department and has spared no effort in bringing as much into the story as she can. It comes, though, at the sacrifice of the story. Rather than be a story teller, Jones prefers creating an extended character study. These ones are interesting enough to make it almost work (and it might work for you), but I'm a traditionalist and I wanted something to happen that I could sink my teeth into.
As a side note: I was disappointed that Jones never developed the Mom's boyfriend's interest in 3-D photography. Such a unique opportunity!
Posted by Paul at 8:53 PM