The Treasure Map of Boys, by E. Lockhart 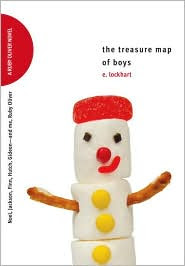 This third outing in Lockhart's Ruby Oliver series picks up where the second one ended. Ruby is weighing her feelings about at least three boys (Noel, Jackson, and Hutch) plus a few others on the side, and feeling a bit like an emotion ping-pong ball. Ag. And a bit like a teen-aged Woody Allen, Ruby is struggling to articulate all of this to her therapist. But what she can't say out loud, she is perfectly capable of expression in some of the most hilarious prose in YA.

It would be tempting to complain that the Ruby Oliver franchise was worn out by now, but that really is not the case, and it deserves a little exploration. In my mind, there are at least two things that make this third book an unusual example of a sequel that is better than the original. First of all, Lockhart has so much fun with Ruby and she is such a greal narrator that you really can't stop wanting to hear from her (the footnotes alone had me in stitches in the middle of the airport lounge at SEA-TAC). More importantly, this is much more than a re-tread of the previous books. Lockhart is very subtly showing us Ruby growing up. Yes, she is still a little bit neurotic and anxious, but she goes through some serious maturing in her perspectives about friendship (and boys) in this novel. We are not stuck just getting the same old Ruby as we saw in the first and second books. In sum, Lockhart scores again!
Posted by Paul at 7:55 PM