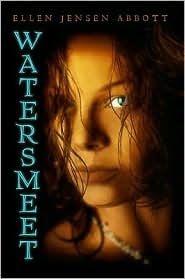 Because of her dark skin and the lack of a father, Abisina has always been an outcast in her town of Vranville. But when an evil beast (disguised as a beautiful enchanting prophet) named Charrach shows up at her village, things change for the worse. Abisina must now flee for her life, in search of the mythical city of Watersmeet where she hopes to find both allies and her father. She finds both allies and enemies along the way, but even when she arrives at the site of her quest, the stakes increase and her mission becomes one of saving her world and bearing witness to a battle that will settle the injustices of her past or enshrine them forever.

A colorful and interesting setting, full of a wide variety of characters, Abbott has created the requisite world for an engrossing fantasy. But she also has greater ambitions than simply telling an action tale. As Abisina reaches Watersmeet, the story shifts from being a quest to becoming a philosophical piece about forgiveness and the cost of war. This is a valiant effort to provide depth to a hack-and-slay fantasy story. However, it didn't work for me. Abbott would like to use Abisina's inability to forgive to illustrate human foibles, but mostly it makes the character seem shallow and the sequences where she struggles with her desire for vengeance just seem like wasted time. The problem is that you can't really tell a war story and a forgiveness tale simultaneously (after all, they are contradictory notions) -- either the folks are going to fight or they aren't. And a YA fantasy is not a good pasture on which to breed indecision. Rather than establishing depth to the story, it read like waffling. And since we know that the characters are going to kill things at the end, all of this talk about peace is basically an empty gesture. That said, the book is impressive and opens all sorts of options for a sequel, so I imagine we'll be hearing more from Abisina. And that might not be all that bad.
Posted by Paul at 10:54 PM