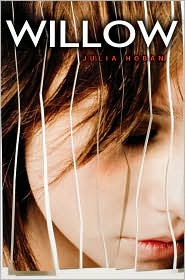 Seven months ago, driving the family car in stormy weather, Willow lost control of the vehicle. The accident killed her parents. Now, she lives with her older brother, his wife, and their infant daughter, and she tries to cope with her feelings of guilt and responsibility for the deaths of her parents. Mostly, she cuts herself, which she realizes is wrong but which gives her a release that helps her deal with her fears. Enter a guy named Guy who takes an interest in her and, when he realizes what she is doing to herself, tries to help her recover. But recovery is a longer road than either of the teens initially realize.

A surprisingly effective and original story on a topic which had pretty much seemed overdone. Cutting is not a pretty thing and Hoban avoids easy solutions, so this ought to be a difficult book to read, but instead it is quite moving and inspiring. The love story that develops between Willow and Guy is authentic and organic, full of emotional complexity with great respect for the feelings they are experiencing (a scene where Guy witnesses Willow cutting herself is particularly dramatic). I wanted some sort of real adult intervention or a happier ending, but Hoban is wise to avoid these easy outs. Instead, we learn that self-mutiliation is something that can be practiced consciously even by a wise and self-aware young woman. Striking! This book should become the new classic on the subject.
Posted by Paul at 9:17 AM