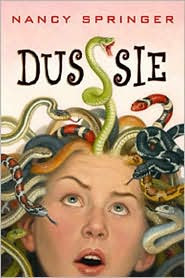 When Dussie Gorgon hits puberty, she discovers a nasty surprise. No, it's not what you think! She wakes up to find that her head has sprouted a set of serpents! Not quite expecting this turn of events, she turns to her mother for a heart-to-heart talk and discovers that she is,, in fact, a gorgon (and named after her late aunt, Medusa). After she mistakenly turns her crush Troy (!) into stone, it's time to call together the sisterhood (Sphinx, Aunt Stheno, and the Lamia sisters). After all, they may all live in New York now (where anything can happen), but turning your classmates into statues and having the worst hair in your class could really ruin your school career.

A clever and engaging book. The whole turning-into-a-monster thing is actually a clever way to adress girls' anxieties about puberty, and there is a nice mixture of serious chat about changing bodies with the humor. I imagine that this would make an excellent choice for a mother-daughter book club. For the rest of us, the book is still a real fun read. The characters are nice, the snakes are funny, and it all wraps satisfactorily (while avoiding cheap feel good stuff at the end). A nice read.
Posted by Paul at 11:05 AM