The Girl Who Could Fly, by Victoria Forester 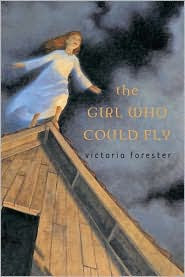 In Lowland County, things are done pretty much as they always have been done. So, when Piper McCloud starts floating around and then starts to actually fly, the McClouds are fit to be tied. They do their best to keep things a secret, but when all is revealed, the government shows up and everyone agrees that it is best if Piper goes off to a special institute for special children. This institute, while first seeming like a paradise to Piper, reveals its true colors as a prison where each child's special talents is driven out of them. Once they realize what is going on, she and the other children become determined to find a way to preserve their talents and escape.

While vaguely reminescent of the X-Men franchise (or the first movie at the least), this is a gentler story - geared more to middle readers. It's a pleasant read but rather derivative -- a secret base in the arctic, an evil matron, a child named Boris Yeltsinov (!), the silly simple-minded country bumpkins, and so on. Some of this is for satirical purposes, but it also seems lazy. The characters are flat, the story formulaic, and the most interesting subplots (the mysterious J, for example) are left unfinished. It's a fair enough read, but nothing spectacular.

I also share the opinion of a blog I read (and I apologize that I don't remeber which one) that complained about the portrayal of Piper's parents and the people of Lowland County. It is a tiring (and offensive) act to depict rural people as simple-minded and prejudiced. Rather it says an awful lot about the prejudices and narrow-mindedness of the writer. Satire has its place, but this is just mean.
Posted by Paul at 11:02 AM