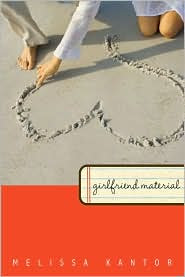 A bit late in the season, but what screams Summer read louder than a teen romance on the beach? In this case, it's Cape Cod and Kate and her mother have fled here from Utah while her Mom sorts out things with Dad. At first, Kate absolutely doesn't want to be here (having been dragged away from her tennis, a writing class, Dad, and her friend). Things don't start off well as their hosts' daughter snubs Kate pretty strongly and Kate is left to spend the days by herself. Gradually, she makes some friends and things improve. The love interest (Adam) helps her mood much more and a youngster taking tennis lessons from her adds some wisdom from the mouth of a babe. As one would expect, it all wraps up nicely in the end with a few minor surprises.

The formulaic nature of the book is, of course, part of its charm. You don't pick up a book like this expecting to be surprised. Not that there aren't a few of those: Kate's got a nice literary thing going (strangely enough, with Hemingway -- not usually the focus of teen girls) and the tennis student is a surprisingly strong character. Still, this is a book that needed heavier editing: the mother-daughter interaction barely reaches out of stereotypes, the subplot about the parental marital difficulties is weak, Kate's relationships with just about everyone (sister, best friend, new friends, and even boyfriend) are sketchy and undeveloped. The other characters (and the plot itself) works best as an instrument to allow Kate to narrate to us. And she's a fantastically dry and cynical narrator. I laughed several times. For a bit of warm Summery feeling, this book is the right sort of material.
Posted by Paul at 9:46 AM

I was asked to post the following announcement to my BLOG. I'm hoping that this is a good place to put it:


Attention all tween girls in the NYC area!

The Amanda Project is the first series that invites tween girls to become a part of the mystery and contribute their own stories and ideas! Come celebrate the publication of the first in the 8-book series - Invisible I - and launch of The Amanda Project!

AND, in the spirit of Amanda, we're also taking submissions from tween girls who aspire to be writers! Send your latest piece of fiction (up to 500 words) to events@theamandaproject.com, and we'll pick a select group of writers to read at the event!

I know that you are based in Wisconsin, but I figured that it would be worth a shot to ask you to share with your readers.