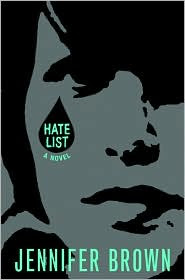 On May 2, 2008, Valerie's boyfriend Nick gunned down a series of their classmates and teachers in the school cafeteria before shooting Val and himself. Val survived the gunshot, but not the notoriety. In the months that followed, she went from suspect to victim to outcast, and no one (not her parents, her former friends, or even herself) could manage to forgive or even understand what had happened. In painful detail, Brown traces Valerie's path to recovery and her attempt to repair her life.

An extremely dark and depressing story, Brown sets up a formidable obstacle in the shape of a grieving teen and a community that is hell bent on seeing her suffer. And it is all dragged out for quite some bit (over 400 pages) as one horrific thing happens to Val after another. Consider yourself duly warned.

This is good stuff and the story is important. The closing messages about the meaning of hate are inspirational and redeem the suffering in the story, but it is a very long path. I'd argue that the story needed some editing and shortening, that the points were made too often, and that certain digressions (like a wonderful art teacher character who never quite forms into a meaningful addition to the story) could have been left out. Brown also got bored with her characters at times and rushed the story forward (the important ending is itself terribly rushed) leading to an uneven narrative.
Posted by Paul at 9:13 PM

Well it sounds intriguing but from some of what you write about it I am hesitant to get into it.