Karma for Beginners, by Jessica Blank 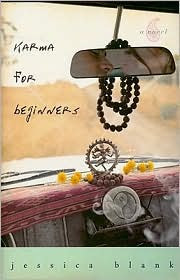 Tessa has spent most of her 14 years being dragged around the country by her Mom, as Mom has searched to find her "soul mate." Now they have ended up in Upstate New York at an ashram where Mom buries herself in worship and Tessa feels bored and forgotten. Enter a handsome 20-year-old mechanic and, before you can say "statutory rape," there's romance brewing. But karma has a way of coming around and getting you. Music from the 70s and 80s features in prominently.

I have reservations about historical novels, especially ones placed in the 80s (as we well know, the 80s rocked seriously, but how lazy is it to be a 30-something writer and placing your YA story in the era we grew up in?) and I'm a bit tired of the child-abandonment theme in YA (lousy parenting is hardly inspiring), so this number has a couple of things going against it. I'll also nail this story for all of the attention it lavishes on (old) music (how excited can anyone -- except for the DJ on my favorite radio station -- get over Neil Young?) and drugs (tripping on LSD is really only interesting if you're the one doing it or so I'm told). So let's switch to what is good.

There's some nice character development in both mother and daughter and the parallel growth (or regression) of both characters is interesting. Their dynamic, while volatile, is more interesting to watch than most YA mother-daughter slug fests. There were plenty of characters I wanted to get to know better, which is frustrating but also the sign of a strong writer.

In the end, I'm not so sure that the story took me anywhere new and I found it dull.
Posted by Paul at 9:35 PM