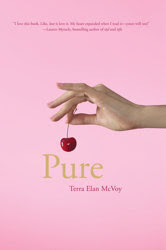 It was so easy for Tabitha to decide to wear a purity ring and make a pledge to keep her body chaste until marriage. The preacher who led the rally was persuasive and her friends were all doing it. But in retrospect, Tabitha isn't so sure now what it was supposed to mean. She has no intention of breaking her vow, but when she finds out that one of her friends did and that now her other friends have shunned the vow-breaker, Tabitha begins to question what the right thing to do. The answer isn't easy to figure out because Tabitha wants to be both moral and loyal, kind and forgiving, but true to her values.

A few reviews back, I said I was laying down a gauntlet for a YA writer to address conscience and religious faith in a mature and respectful fashion. Had I realized that the challenge would be answered so quickly (and in fact was already sitting in my to-read pile), I would have just hurried off to read this book! McVoy really hits the subject soundly and firmly. Tabitha (by her own admission) is no Bible-thumper but she struggles with what her faith tells her. A significant part of this story is devoted to her search for the Truth, which she gets help on from her pastor, her parents, her friends, and some independent research. None of this is ever mocked (or glorified). Instead, it is a fact of her life -- an integral part of her character. And, if organized religion makes you uncomfortable, you needn't be bothered too much by this element of the story because it is hardly shoved down your throat.

Now, that element of the story itself was wonderful, but there is so much more going on here. The entire culture of the promise rings was new territory for me, so I found it fascinating. There's some great dynamics between Tabitha and her friends and you really feel for these young women as each of them struggle with their consciences and with their conflicts. As a guy, I'll admit that the digressions about shopping and make-up made my eyes glaze over, but even these have a distinct point in the story (and I loved the fact that Tabitha's Dad actually has a talent for picking out clothes -- how often do you see a non-clueless father in YA?).

There are a lot of other elements to this story and I imagine that this would make an excellent book for discussion. That in itself should be considered a mark of approval.

The gratuitous mention of Quakers on page 242 does no harm either.
Posted by Paul at 9:18 PM