Return to Sender, by Julia Alvarez 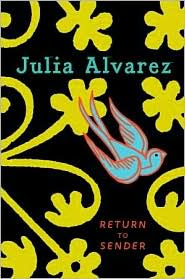 When Tyler's father is injured, his parents start talking about selling the farm, which worries Tyler because he has had too much loss lately (his grandfather has recently passed away and his older brother is leaving for college). Instead, his parents hire three Mexican men to help. The men turn out to be a godsend ("angels" as Tyler's Mom refers to them) but bring along with them three young girls (the eldest of which, Mari, is 11 years old, the same age as Tyler). At first, Tyler doesn't want to have anything to do with them and when he finds out that the men are illegal aliens, Tyler grows upset that his parents are breaking the law. But as time passes, Tyler gets to know them better and develops a close friendship with Mari.

Alvarez's political agenda hangs heavy over this book. The book's title itself is an allusion to a US campaign to crack down on illegals during the mid-2000s and the entire structure of the book is engineered to criticize that policy. Whatever your feelings may be on the subject of immigration, the doctrinaire nature of the storytelling was very distracting to me. Truth be told, I rarely have much patience for books with an axe to grind. It seems to me that there are really only two possibilities -- you are either preaching to the choir or you are offending someone (who probably won't finish the book anyway!). Either way, it is condescending to the reader, especially in a story geared towards younger teens as this one is. Save the politics for older readers who can engage the issues intelligently!

Putting that complaint aside, the story itself holds up reasonably well. The side characters are a bit weak (many of them are there to serve political aims) but Tyler and Mari are nicely developed. I especially liked that their friendship remain platonic and the author didn't feel the need to create a romantic spark. The bilingual narrative is unobtrusive and adds nice color to the story. The plot itself moves along at a brisk pace and is quite entertaining.
Posted by Paul at 8:56 PM