Say the Word, by Jeannine Garsee 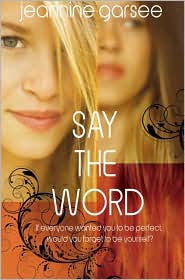 Shawna was abandoned by her mother at the age of 7, when Mom ran off with her lesbian lover. Eleven years later, when Mom is dying, Shawna gets an opportunity to see her before she dies and begins to discover what happened to her mother after she left them. But this attempt at reconciliation is quickly overshadowed by her father's moves to seek revenge for the abandonment. As Dad's actions threaten the safety and sanity of everyone around them, Shawna slowly begins to realize the things that have been happening around her are not right, and that she must take a stand.

The fact that the book is inevitably hurtling towards a happy(-ish) conclusion is about the only thing that kept me going through this masochistic love fest. The father is a horrible person and the daughter is not much better. Page after page of selfishness and meanness is barely mitigated by Shawna's incessant crying and self-pity (woe is me! woe is me! My Mom was a terrible dyke and hated me!). Give me a break! By 150 pages in, I was developing a true hatred for Shawna. What kept me going to the end was a need to see her (1) grow up; (2) lose her homophobia; (3) get a clue; and (4) become a decent person. I'll ruin the ending slightly by saying that she sort of does these things...but really, there's making your heroine a bit flawed to make her interesting and there's creating a mean nasty witch who almost deserves her nasty abusive father. (Wow! I obviously have issues, here, don't I?)

That said, I read the entire book, so I obviously didn't hate the story (I just hated the characters). I'm not sure I learned much from reading it, but it certainly sucked me in. The author apparently intends the focus to be on how Shawna struggles between trying to be pleasing and containing her anger (and I certainly got that Shawna has anger management issues), but I think the story had a lot more to say about how people who refuse to listen to each other create their own misery. If the reader can pick up that message, they'll have gotten something useful from it. What you will have to put up with is an anwful lot of yelling, a bunch of angry people, and some real nastiness.
Posted by Paul at 8:30 PM

Are you sure you read the book? I thought it was wonderful.

What you don't seem to see is that Ms. Garsee is dealing with all the emotional things teens deal with that most of us don't see. And she's putting them in extreme situations, pushing her characters to limits most of us don't have to deal with.

When I was a teen, I didn't tell people what was going on in my head. I didn't want people to see the bad or good thoughts going on in my head. When you're a teen, you're learning and your mind goes everywhere. I think Ms. Garsee captures the confusion of being a teen and the struggles to mature and make the right decisions. And figuring out what they want out of life b/c when you're a teen, you only have partial control. Carving out what your wants are vs. what your parents want for you is very difficult.

BTW - the mom died of a stroke. Not cancer.

I certainly did read the book, but I just didn't like it. :)

Confused teen is fine. Teen with strong emotions (often hidden) also works for me too. But this one was just over the top for me. And I really hated her. Where I think we disagree is that I don't believe that "pushing her characters to limits" makes for good storytelling in this case.

You make it sound like Garsee is doing this to help teens. I think she is just trying to sell a book.

Do you know much about the publishing world? Because 90% of the authors I know have full time jobs and write on the side. Because they don't make that much money.

She writes b/c she loves writing. And she pushes her characters and explores the YA mind to let teenagers know they aren't the only ones with issues. And sometimes, adults do understand.

I won't say that her main character didn't get on my nerves too sometimes, but when a story is a more internal battle, you should expect it. You're getting an unfiltered internal dialogue. And people aren't always good.

Everyone needs to take a deep breath and count to ten....

There's been a bit of a backlash on this particular post. I find that interesting and would normally welcome it, but some of the comments I'm getting here are personal attacks and not appropriate (and I have deleted them). BTW, if your post has not been deleted, then I have no problem with it. :)

It is perfectly natural that I may not like books you love (or love books you despise), but that does not mean that I'm a sloppy reviewer. It just means I'm a person with different viewpoints.

I'm happy to have a conversation about these books, but let's all be civil about this. I have not attacked the author (I actually liked this book and I liked Garsee's first book even more), but simply the characters, who I found hard to stomach. I'd appreciate it if we could keep the discussion on the book, rather than attacking my literacy (yes, I had some typos in the review - I was typing it in from my handwritten review late at night and I should have proofed it), experience (I've been writing these reviews for four years and have reviewed about 650 books -- I know a GOOD deal about the lit), or competency (my review is my opinion -- nothing more and nothing less).

Feel free to post anything you like about how you disagree/agree with me, I'm happy to have you take me to task for cases where you feel I'm off-base, but no personal attacks, please!

So now you censor your blog?

To clarify, I had no problem with your original (removed) post until you wrote: "Perhaps you should REREAD the book and comprehend it before you write things that you don't understand." That was not a nice thing to write (after all, I understand full well that in this particular work of fiction, I did not like the character, which is all I have said -- that she may or may not be a realistic teen is not what I was speaking about).

And using flaming words like "censor" is EXACTLY the sort of thing I was speaking about. We both have a right to our opinions and neither of us deserve to be denigrated for expressing them.

In that spirit, here is the text of what you posted (minus the offending portion -- which I have quoted above if anyone wants to read the whole thing):

"Whoa, Paul, I definitely think you missed the point on the story. As the mother of a teenager, Shawna was very real and typical of a teenager. I'm not gay, and haven't abandoned my children, but WHAT do you think that would do to a 7 year old? If Shawna was homophobic, it was because it was drilled into her night and day by her dad, being called gay by people who knew her story. She reacted the way any teen would."

Paul, from reading your review (and we are the same age) you seemed to miss a few points. I also read your review of Ms. Garsee's first book and you completely missed the point on that one too. Ms. Garsee is writing gritty urban fiction. THIS is what happens in the real world, and yes, it is depressing, but there WAS a point and moral to the story.

Does every book need to have a happily ever after? Does everyone need to survive the apocalypse? No. I want a strong MC and Ms. Garsee can write strong MCs with some vulnerability. Perhaps her style of writing isn't flowery or Meyerish, but she's got a great imagination and she knows people.

I don't want every character to be Bella Swan.

Laura, I think you are correct. I'm pretty biased about the types of characters I like to read about. I'd certainly agree with you that Garsee has created a realistic heroine in this novel. My complaint was not that she wasn't realistic, but that I didn't like her. For me, that is an important part of a novel. I simply find it impossible to enjoy a novel where I dislike the main character.

Now, that said, I have less of a problem with characters who start off badly but change and get better. That DID happen in this case, but it happened too late my my tastes. By the time she started showing some decency to her friends, she had worn out my tolerance and I just no longer cared about her growth.

As for happy endings, I'm not a big fan of those either. You'll notice in my reviews that I go after books that try to wrap everything up too neatly in the end. But I do want my main characters to become decent people.

BTW, I'm not really familiar with Stephanie Meyer's books. I saw the film of Twilight but I'm told it's pretty different from the books. I'm not a big fan of vampire literature.