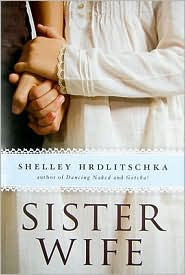 Following the long tradition of books written about teenage girls growing up in polygamist religious sects, this is a story of three young women who struggled with their faith and (moreover) with the restrictions with which they live. There are the usual stereotypes -- the greedy and corrupt leader, the angry father, the weak mother, and (of course) the doubting (and unbelievably worldly) young women. Two twists make this novel a little different: it is told by three different narrators (the doubting Celeste who wants to marry a boy her own age, her younger sister and fervent believer Nanette, and the worldly outsider Tavianna); and there is a subplot about a pagan worshipper who erects stone statues and imparts the (author's obviously) preferred spiritual alternative.

To set the record straight, I would certainly have a bone to pick with a polygamist faith, but these types of books are so intolerant of organized religion altogether that they are hard to read. No attempt is ever made to understand the faith (Nanette's beliefs are largely ridiculed as naivete). Instead, we just get an endless history of injustices and hypocrisy which are portrayed as the pillars of the faith. As this religion is described, it is nearly impossible to imagine why anyone would follow these beliefs. A straw man villain is a terrible cop out.

I will lay down a literary gauntlet: I want to see a YA novel that takes a perfectly reasonable faith and portrays why people like it, avoids any opium-of-the-masses or aren't-these-folks-so-dumb-and-gullible plot lines, and shows a young person struggling with that faith for real. We're talking nice subtle crisis of faith stuff. I'd bet big money that young people (and adults) would really relate to a story like that. The closest I've seen so far is the novel Converting Kate, which easily left this exploitative book in the dust!
Posted by Paul at 11:12 AM