Take Me There, by Susane Colasanti 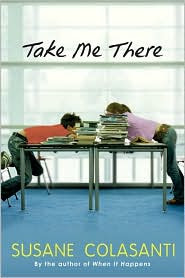 Three students at Eames, a magnet school in NYC, give their personal perspectives on the events of a week. There's Rhiannon, who has just been dumped by her boyfriend Steve and desperately wants him back. And her friend Nicole who is seriously infatuated with her math teacher (but harbors some dark secrets that could complicate things). And finally James, who wishes that Rhiannon would notice him and forget about Steve. Told in half weeks by each teen in turn, this story revolves around the idea that the events are not really clear until all three voices are heard. As a result, the reader stays just enough in the dark throughout to not get too far ahead of the characters.

It's a clever idea (and actually better implemented than your typical shifting-narrator story), but I found it uneven. For the idea to work properly, the story really has to be the same but simply fleshed out differently by each character. But in this case, Colosanti achieves suspense simply by omitting key details in each account. As a result, you really wouldn't be able to clue out what is going on because you are missing information all the way up to the end. The result is confusion and a lot of work for the reader. Add some pretty inane slang and characters who never come alive, and I found this a hard book with which to engage.
Posted by Paul at 10:57 AM