Cracked Up To Be, by Courtney Summers 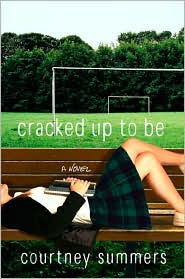 Once upon a time, Parker was the perfect student, captain of the cheerleaders, and the center of attention, but then everything started to plummet and no one can figure out why. Why she started showing up at school drunk, failing all of her classes, or finally in a hotel room with a bottle of Jack and another bottle of sleeping pills. Now, she is bad news. With hardly a kind word for anyone and a determination to drive everyone away, her anger mostly focuses on her ex-boyfriend and a new guy at the school who is determined to break through to her. All of this is a thankless task as she spends 212 (out of 214) pages being a calculating witch to everyone around her.

Now, I really am afraid of the people who are going to take me to task with statements like "I really related to her" and so on. If you can relate to Parker, then you must be something of a sociopath...and a very scary individual. The point of a story like this is mostly to show the dead end nature of self-loathing (and to eventually show the character overcoming their problems and going through some sort of rebirth). At least, that's the only reason I can see for trudging through the sheer nastiness of a story like this. We want to know what could make a nice girl become so mean and how she'll break out of it. The irony that you begin to realize, though, is that Parker was never a nice person. A self-absorbed perfectionist, she seemed (even in her better days) to enjoy belittling people and promoting herself. This insecurity combusts though when faced with the reality that she too can become vulnerable and fail. The lesson, Summers would like to teach us, is that hedonism at this scale is self-destructive. As such, there shouldn't be a soul out there that wants to follow the example.

So, is it a good book? Summers is a decent writer and the whole thing comes across authentically. The story is complex and thus engaging. But again, this is hardly a book that one reads for pleasure. The main character is so nasty and so mean that I was writing her off early. And in the end, the explanation for her pathology seemed pathetic after all of the wind-up leading to it. I never quite had the pay off that I needed to reimburse me for the time spent enduring the character. So, how do you rate a well-written story about a character that you despised? If you don't mind despicable heroines, then you might like the book. As folks who've read my other reviews know, I have to like my characters (or at least see something redeeming in them) to make it worth the effort to learn about their lives. Parker Fadley doesn't deserve my time.
Posted by Paul at 8:30 PM