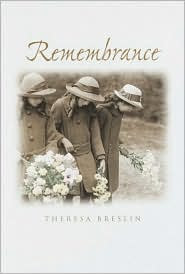 And now for something completely different...

Remembrance is the story of five young people who participate in the Great War. Francis and Charlotte come from a wealthy landowning family, while John Malcolm, Maggie, and Alex are the children of the local shopkeeper. However, their friendship and their involvement in the War effort brings them together. Wound up by patriotism and idealism, these teenagers of another time grow up quickly in a War that surprises everyone with its brutality and harshness. Breslin has crafted a story that is YA only in the sense that its protagonists are in their teens. You will find no familiar tropes here. No proms, boy crushes, or any of that fluffiness. This is a fairly mature story of a time in history which is probably only seen by most teens now in two-dimensions in some World Civ class. Kudos to the author for attempting to make it more alive!

Telling a story from at least five points of view is a difficult undertaking, but Breslin does it well. Each character has their own voice and their own purpose for being in the story. As a result, the narrative rarely felt confused or cluttered. Excellent detail helps the period feel and anachronisms are kept to a minimum (Maggie's proto-feminism is nicely explored without imposing modern ideas upon it). In sum, this is a lively way to view a world of nearly a century ago.

I am not convinced that the book is truly YA. The characters mature and come of age, but we see very little of that development. Breslin is more interested in external details and in lofty statements about the horrors of the War than in writing of the micro-level growth of the characters. Love, for example, is accepted as fact rather than shown. There isn't much room for emotional growth in war time, at least not in Breslin's stiff-upper-lip depiction of it. As a result, this story works best as an adventure story.
Posted by Paul at 9:15 PM