The Sweet Life of Stella Madison, by Lara M Zeises 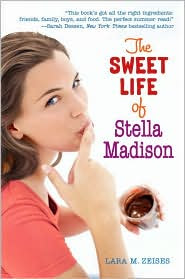 Stella definitely has a pretty sweet life. The only daughter of two major big-name culinary figures, she has all the friends, fun, and looks a 17 year-old could ask for. But she's horribly conflicted by having to choose. On the one hand, there's her loyal and adoring boyfriend Max. On the other is the gorgeous intern that her mother's hired to work at the restaurant this summer. So what that he's nearly 21 and so what that Stella's idea of a great eat is a ball park frank instead of the haute cuisine promoted by her parents? These are minor complications! But as summer progresses, Stella struggles to figure out what she really wants.

Now, a book by one of my favorite authors (Zeises) with glowing reviews from two of my other faves (Dessen and Lockhart) on the book's cover has a lot to live up to, but I think the reviewers got it right: this is indeed "the perfect summer read" (Dessen) that is "full of broken hearts, broken promises, and broken eggs" (Lockhart). It is no instant classic and I'll probably forget the details quickly enough, but it fulfills all of your nutritional needs and leaves you with a full stomach.

In a book like this, it is all about the details. Sure, I'm not huge fan of long descriptions of the clothes she wears or the make up choices she makes (I rack that up to being a clueless guy!) and I can't stand it when a character totally abdicates on their responsibilities (e.g., Stella's pathological ability to ignore phone messages), but it is one of Zeises's skills as a writer and Stella's charms as a character that the book devotes so much attention to those details. The food angle itself is fun and Zeises explores it in all sorts of ways (from Stella's flirtation with food reviewing to the way that her Dad communicates through cooking). Finally, the side characters (while fairly stock) are humorous and an integral part of the story.

And then there is the smart writing. Zeises caught my eye with her absolutely outstanding novel Bringing Up the Bones. As I've already said, this book is hardly that sort of classic. However, even in a light read, Zeises combines wit and insight with some very down to earth moments when she needs to be. Stella is very much alive and strikingly authentic. And while she has that caustic wit that we expect from our summer reads (think Ruby Oliver), she never really forgets that she's a teen and not just some sit com character.
Posted by Paul at 9:23 PM