Waiting for You, by Susane Colasanti 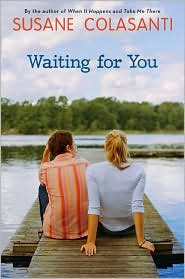 Marisa has the hots for Derek, who is involved with Sienna. Meanwhile, Nash who has known Marisa for ages is annoyingly interested in her at the same time. Marisa's best friend Sterling is hopelessly infatuated with guys she meets on-line. Marisa's parents are separating. And a stranger on-line named Dirk seems to know something about everyone. Who ever knew that Sophomore year could get so complicated?

In her third and latest outing, Colosanti gets high marks for getting the tone of contemporary teens down so well. As in her other books, dialogue is her strength (it's also her obvious love as most of her writing is conversations). Unfortunately, as with When It Happens, the rest of the writing just doesn't keep up. From the looks of it, she really isn't very interested in telling the story and most of the plot sort of falls in here and there in random order. At first, I figured it was an attempt at authenticity (having the narrator tell her story in the sort of random way that a teen might), but even that really does not hold together. It's a terrible handicap that turned this novel into painful reading. Such a difficult balance (excellent dialogue with badly disjointed narrative) and the result is a story that hangs together best when the characters are speaking and quickly falls apart when they are not.

In sum, a sweet story that feels authentic and has a great voice, but is not terribly original and is poorly told.
Posted by Paul at 7:13 PM