When You Reach Me, by Rebecca Stead 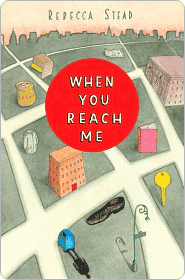 In April 1979, Miranda's mother gets invited to appear on the 20,000 Pyramid [for you young'uns, that was a popular game show at the time] but the most interesting events of this story are occurring closer to home in the neighborhood. Miranda is receiving cryptic letters that she becomes convinced are being sent from a traveller from the future. The message is not benign: a friend of hers is in danger and she must write a letter to save this friend from certain death. But to whom is she to write to letter? And to when?

This modest but strikingly original novel is complex and multifaceted. On its face, this is a coming-of-age story of a sixth grade girl in New York. It's a nice story (twelve years old in 1979 is something I can personally relate to quite well), but nothing extraordinary and not really the point after all. The more interesting part is the riddle about time travel (told from the perspective of the people not doing the traveling). This is the clever part of the novel - never entirely spelled out - with just enough paradox and open-ended twists to get the mind going. Finally, there is a subtle but loving tribute to Madeleine L'Engle who inspired the author to write this story and whose books I remember loving myself when I was twelve years old. This is the kind of a book that makes you want to rush back to read those books again. Other details (about friendship, reaching for one's dreams, and confronting prejudice) are nicely added in, but not dwelled upon.

My problem with the book is figuring out who would be the likely audience. I personally found it a bit confusing to read and suspect I'd have to go through it another time or two before I really understood what was going on. I'm not sure that middle readers would keep up with at all. Teens won't find it very interesting because of the youth of the characters. So, I fear that this may slip off people's radars. The book itself has been well-promoted, but there is no wait list to check it out, so I suspect my fears are justified.
Posted by Paul at 10:40 AM